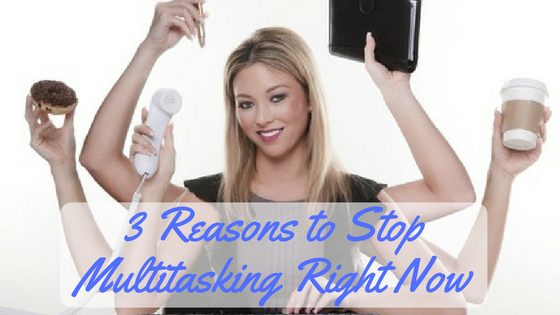 Increase Your Productivity and Manage Your To-Do List Better

Almost everyone has felt, at some point or another, that there simply aren’t enough hours in the day to get everything that needs to get done, done. In those moments, we start to think that we can simply learn to juggle two (or more) tasks at once and pack more into the day!

Unfortunately, there is a massive body of research that indicates the exact opposite is true: multitasking is inefficient and time consuming. As your time management spirals out of control and you’re unable to complete projects, you’ll start to feel higher level of stress, which take their own toll.

Let’s take a look at 3 major reasons you should give up the notion of multitasking right now, and instead look for ways to reduce distractions while you work.

You might feel that you get more done when you multitask, but the opposite is true, and the research backs it up. Your brain isn’t wired to juggle multiple processes or tasks simultaneously. What it does instead is shift gears, in a two-step process. First, there’s “goal shifting” — recognizing that “OK, we’re doing this now instead of that.” Second, there’s “rule activation,” which involves identifying the rules and processes required in the new task, and prepping your brain to handle those new constraints.

Goal shifting isn’t that hard — your brain can manage it very quickly, and you can even prime your brain to handle this ahead of time. Rule activation is more complicated, and it’s not something you can prepare for in advance.

As the American Psychological Association points out, studies suggest that multitasking in this way can eat up a massive 40% of your productive time. You often spend longer than you would on a task to begin with, which means you have multiple projects dragging out for longer than they should. This sort of situation can easily spiral out of control as your to-do list grows, and it becomes a major source of stress.

Studies show that multitasking instead of focusing on one thing only means you are less likely to remember information — and worse, you’ll struggle to recall where you left off with a task, meaning more time wasted as you find your place again and again.

In addition, you may struggle with fitting the information you have retained into the bigger picture. You might have read a fascinating article about the way your industry is heading — but can you connect the dots and see where your company fits into the changing landscape? What does that big important statistic mean? Whether you’re writing an industry think piece or just trying to determine the direction of your company in the coming months, your compromised mental state could lead to missing something big.

Most people don’t enjoy meetings. Often they feel meetings eat up time that could otherwise be spent being productive….so people try to multitask during them (checking and responding to email, other tasks). The problem is, as we’ve already said, that you’re not really being more productive. You’re just splitting your focus and extending the time it will take for you to get the task done.

And worse, you run the risk of making a bad impression on your colleagues and superiors. Research shows that top-performing employees tend to have very high emotional intelligence. Multitasking, on the other hand, indicates low emotional intelligence — specifically low self-awareness and low social awareness.

A researcher has uncovered that there are a handful of people — an estimated 2 percent of the population — that can not only handle the demands of juggling multiple tasks, but excel at it. They’re nicknamed “supertaskers” and the more they do, the better they perform in all the assigned tasks.

But you’re likely not one of these super taskers. Very few people are, and identifying them is challenging for a lot of reasons — their gifts are very rare, these people are spread out all over the world, and administering the tests that can accurately assess their abilities is a challenge, for starters. .

Not only that, but a study at Stanford University actually revealed that the better someone thinks they are at multitasking, the less likely they are to excel in tests of their abilities. So the people who go about touting the virtues of multitasking are likely some of the worst advocates for the practice.

How Can You Stop Multitasking and Reclaim Your Productivity?

Multitasking presents real perils for anyone who wants to succeed in the workplace. Fortunately, with a bit of effort and the right tools, you can reclaim ability to be productive and get your to-do list under control for once.

Start by reducing distractions in your workplace. That means removing the TV from your home office, for example, or closing out of your Twitter and Facebook feeds. Skip the television in the background and go for music (ideally instrumental) if you require some sort of noise.

It’s also time to re-think how you work. Email is one of the biggest time sucks any one faces in the workplace. So rather than responding to emails as they come in, set aside specific blocks of time to respond, and don’t respond outside of those hours.

Another common tactic is to block out your most alert, productive hours for the most challenging task(s) of the day. If your best hours are early in the morning, skip the deluge of emails and get straight to the most demanding work. If you’re more of a mid-afternoon person, block out those hours instead.

The good news is that you’re not alone! A coach or mentor can help you identify problems in your routines and show you how to increase your productivity. In addition, there are plenty of tools available to help you eliminate temptations. Here are a few to consider:

Obviously, these are just some of the options available. In the end, you’ll need to find a system (or app) that works for you, so do your research and try different tools to see what suits your lifestyle!

Multitasking isn’t going to go away anytime soon — but you can break free from its control and reclaim your time. Once you recognize that multitasking creates more problems than it solves, you can start to move forward and up your productivity, conquer your to-do list, and start living life on your terms, not the ones the clock dictates.